The Ticket Merge function is useful when a customer sends in multiple tickets with the same issue.  Or maybe they open a ticket on the website but then send an email which results in two tickets.

When a ticket is merged, the current ticket (the one you’re viewing) is closed and all of its entries (original post and all replies) are entered into the new ticket as a single entry.

To merge the CURRENT ticket you are viewing into an existing ticket locate the Merge And Lock metabox on the right side of the ticket screen. 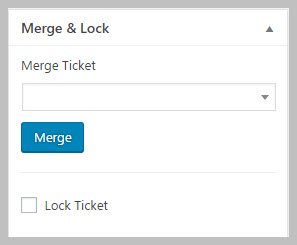 Type in the first few characters of the title of the ticket you are merging into in the edit box under the Merge Ticket label.  You will see a list of tickets that match those characters – similar to the image below: 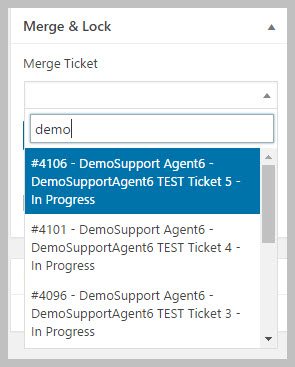 Scroll down the list to select the ticket, hit the ENTER key and then click the MERGE button.

There will be a brief notice under the opening post of the old ticket to alert any future viewers that the ticket has been merged along with a link to the merged ticket.