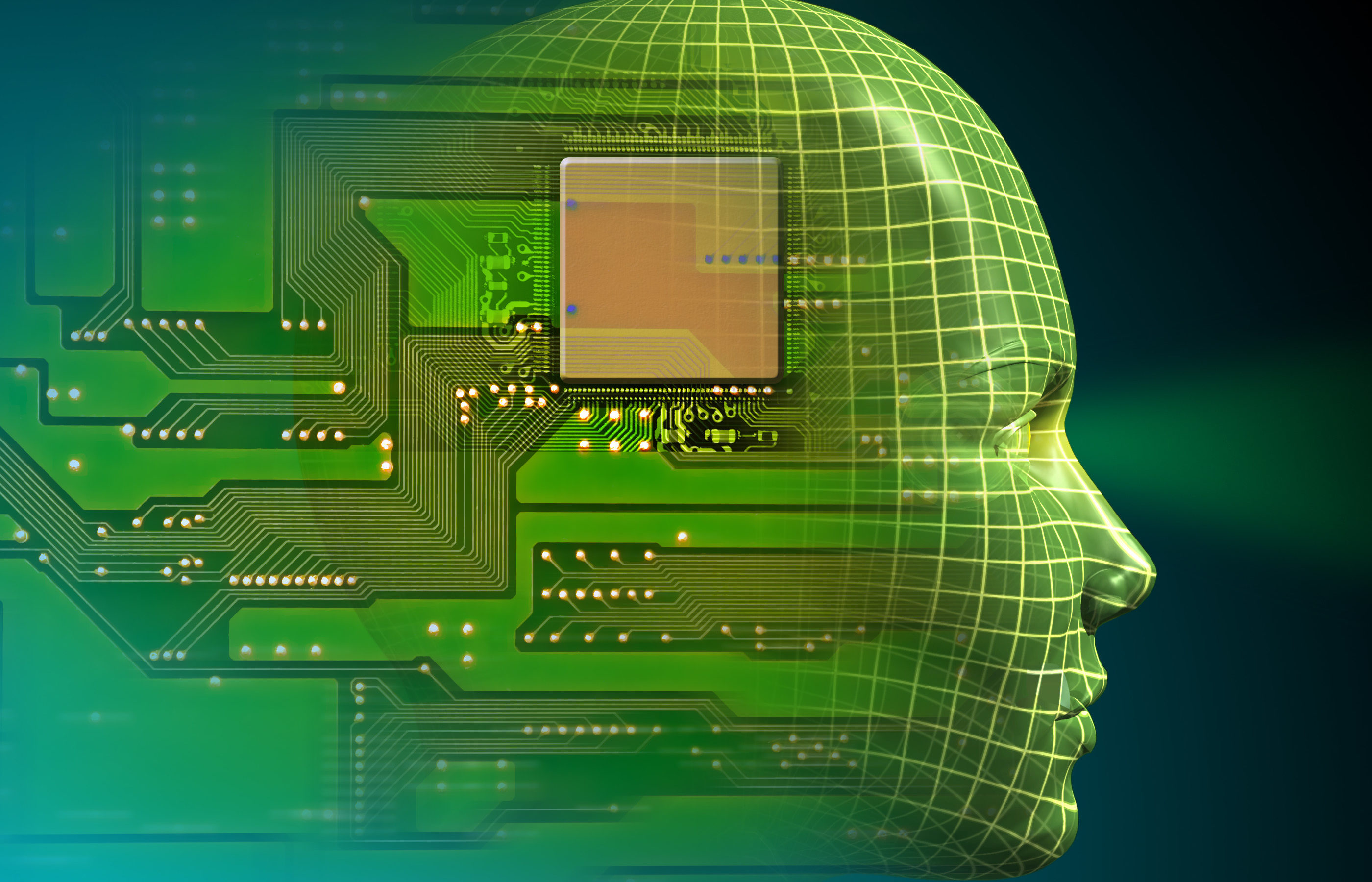 About 8 months ago we embarked on a project to create an add-on for Awesome Support that integrated the Awesome Support ticketing process flow with one or more hosted AI engines.  The vision was that the AI engine would evaluate the contents of new tickets or inquiries (regardless of source) and automatically send relevant responses.  The business driver was cost - its a lot cheaper if an agent does not have to be involved in a support ticket.  So if an AI engine can help get the user a more accurate automated response immediately then everyone wins.

But, the jury is still out on whether this project was a success.

Customers have been slow to embrace the idea - probably because setting up the actual connection to the AI host is not exactly a walk in the park.  One of the biggest issues with plugins is that everything has to be set up on the customer's servers.  Unless we create an SAAS service to host the configurations and act as a gateway to the AI engines, the customer is ultimately responsible for the actual connection between their server and the AI host.

Still, the entire process provided a ton of insights into how to use AI and some unexpected caveats that need to be avoided.

We ultimately ended up building a number of disparate functions that were based on the same AI search engine infrastructure:

Automatic replies takes new tickets, extracts keywords and then searches the WordPress site for relevant articles to send back as suggestions to the user who opened the ticket.  If this process works, chances are the user can close the ticket without a support agent ever getting involved - and that's an immediate cost savings to any business. 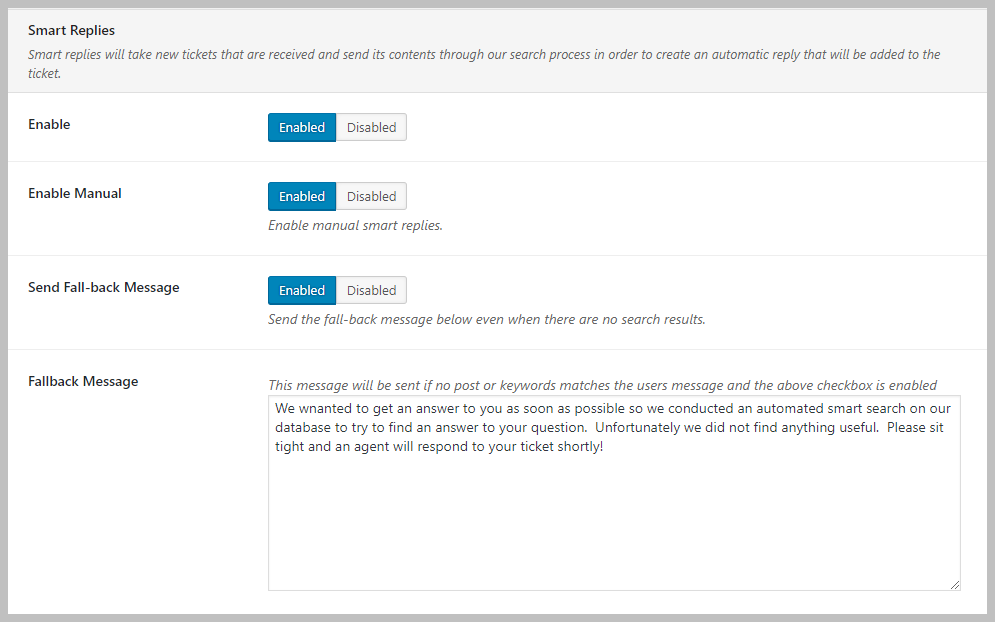 The Chatbot function places a chat box on designated pages of the WordPress site.  A user that arrives on the site can open the chat, enter a few keywords and get back instant responses to those keywords.  They can also get responses to conversational phrases such as "Hi" or "How are you" or "What's your name"?

Again, a successful interaction would mean one less ticket and one less expensive agent interaction. 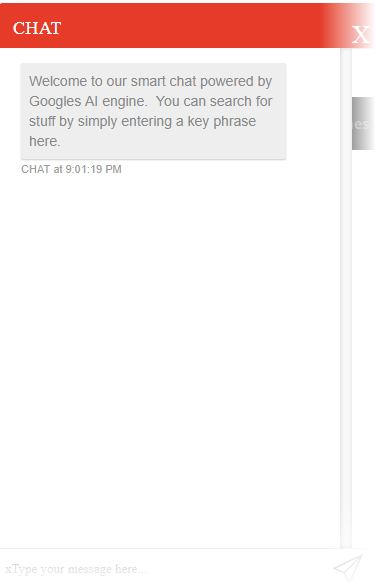 How We Built It

The initial version was actually just the Facebook chatbot.  And it included no AI smarts whatsoever.  Instead, it simply took the user's message and did a search of specified post types (FAQs, Documentation etc.) ultimately returning the document links to the end user.  Now, if you know WordPress's default search algorithm you'll realize that what you got back could end up being wildly irrelevant. But at least it did filter for things like "Hi" and "Hello" and returned appropriate responses when it encountered those items.

The second version is where we provided an optional integration with Google's DIALOGFLOW service which is Google's flagship conversational AI service.  It allowed us to send through the full text of the user inquiry and have the AI service make a good faith attempt at eliciting the user intent, ultimately returning one or more appropriate responses.  This worked better - as long as you took the time to set it up properly.  For small sites, its not a lot of work but smaller sites would not get much benefit from this.  For larger sites, it could take a decent amount of work to train the service to return the proper answers to user queries.

Our next attempt to improve things revolved around reducing the amount of work that users would have to do to configure and train Dialogflow.  To achieve this we integrated Dialogflow with WordPress's custom post types - enabling it to search specified post types (such as FAQ, Documentation etc.) based on user intent in order to return relevant answers.

This worked well.  Well enough that we decided to finally add the "Smart Replies" feature and move away from just interactions with chat windows.  As mentioned above, SMART REPLIES takes any new ticket and automatically returns relevant links to the user as the first reply in the ticket thread.  If the links were relevant then the user could close the ticket without any additional interaction from an agent.

"Smart Replies"  - Not So Smart

The problem with "Smart Replies" is that new tickets tend to contain multiple sentences and paragraphs.  Sending this raw data through to Dialogflow or the WordPress search system generally resulted in very poor results because Dialogflow has a hard time eliciting intent from that many words.  It was obvious we needed to extract relevant words from the tickets and then implement the searches based on those keywords instead of using entire sentences and paragraphs.

And that's where Google's Natural Language Engine entered the picture.

The Google Natural Language engine can take any block of text and return a list of keywords, verbs, nouns and other relevant lists - with the values sorted by the probability of being relevant in the context of the text.  And it can do that with multiple languages.

The image below shows the high relevance keywords that are returned from Google Natural Language for a particular ticket: 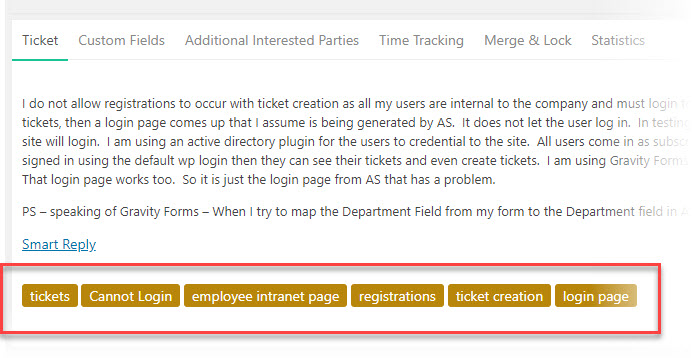 While not all keywords are relevant, there are enough relevant keywords that the results returned from a search are good enough to send back to the user as an automated reply.

So, if all integrations are turned on, the process goes something like this:

With this sequence, the end user ends up with an automatic reply that looks something like this:

In running through the tests we ended up realizing that we needed to provide the administrator with the option of NOT using Dialogflow since that involved a lot of set up work.  As it turns out, allowing the admins to remove that layer in the processing sequence did not harm the reliability of the results as much as we thought it would - and it seemed that for most users simply using the Natural Language layer would be good enough.

So with this tweak the AI discovery process became this:

In addition to results still being useful, we reduced the amount of time it takes to process a ticket.  So, it's not a bad tradeoff overall if the admin decides not to use the Dialogflow component.

When a customer started shaking down the Smart Replies function they discovered two things:

These two were quickly resolved with a few more configuration options. 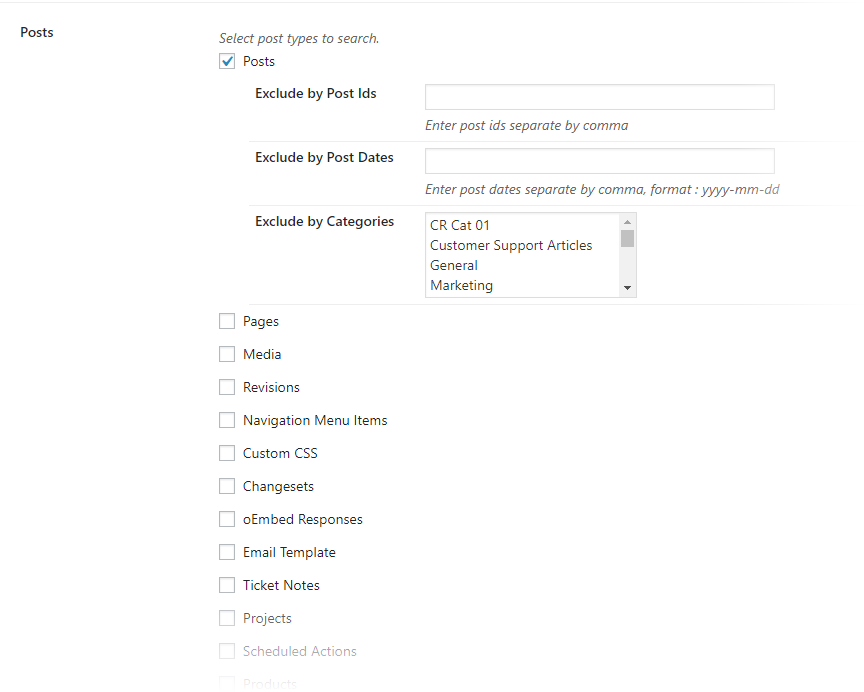 But what was surprising was the that customer wanted control over the types of keywords used for searches as well as control over the relevance SCORE that Google returns.  So we quickly added in features where the admin can specify the minimum relevance threshold that a keyword has to score before being used in the search process as well as the types of keywords that can be used. 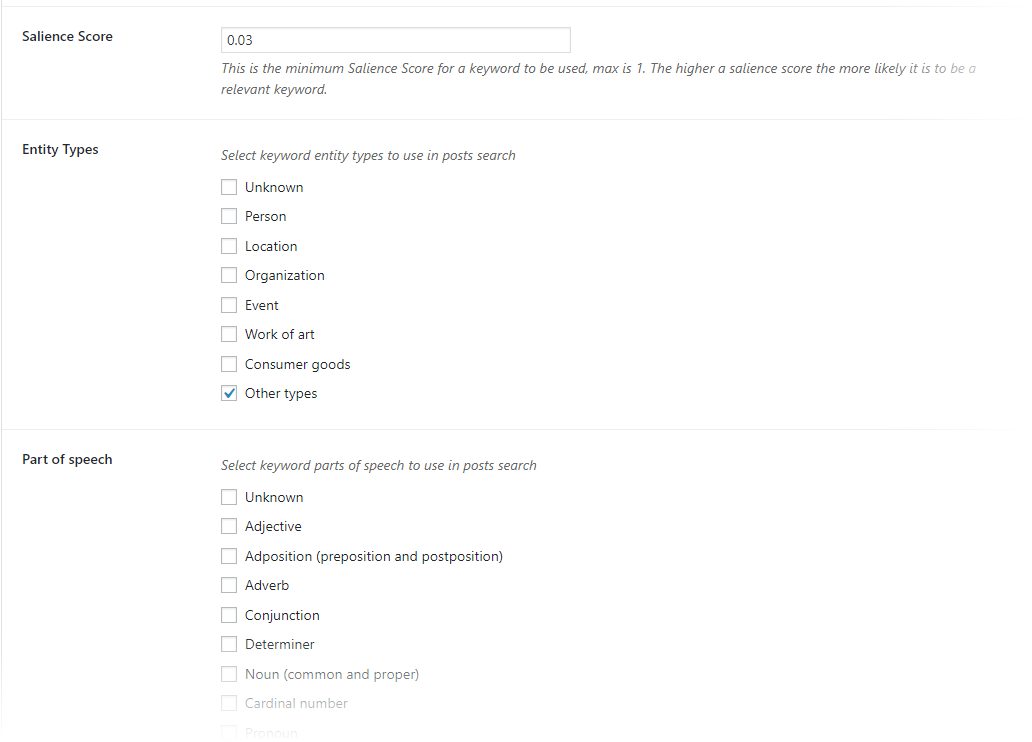 Once we added these additional options the admin had everything they needed to really customize AI integration to match their data patterns.

In the process of building out these functions we discovered three things:

Despite the slow uptake by customers we do believe that AI integration into helpdesk systems is inevitable.  The potential cost savings are just too great to ignore.  Its just a matter of what kind of interactions will be useful to customers VS what will annoy them.

Going forward, we plan on integrating AI into the ticket submission process pages - before the ticket is even opened.  Many sites "force" users to perform a general search or to follow a faceted search before even showing a ticket form. If these kinds of 'forced' searches had some AI smarts behind them its possible the users wouldn't get so annoyed by them.  That is going to be the next area where we will invest some exploration time.

Do you have other ideas as to how AI can be infused into help-desk systems? If, drop us a line via our contact form.